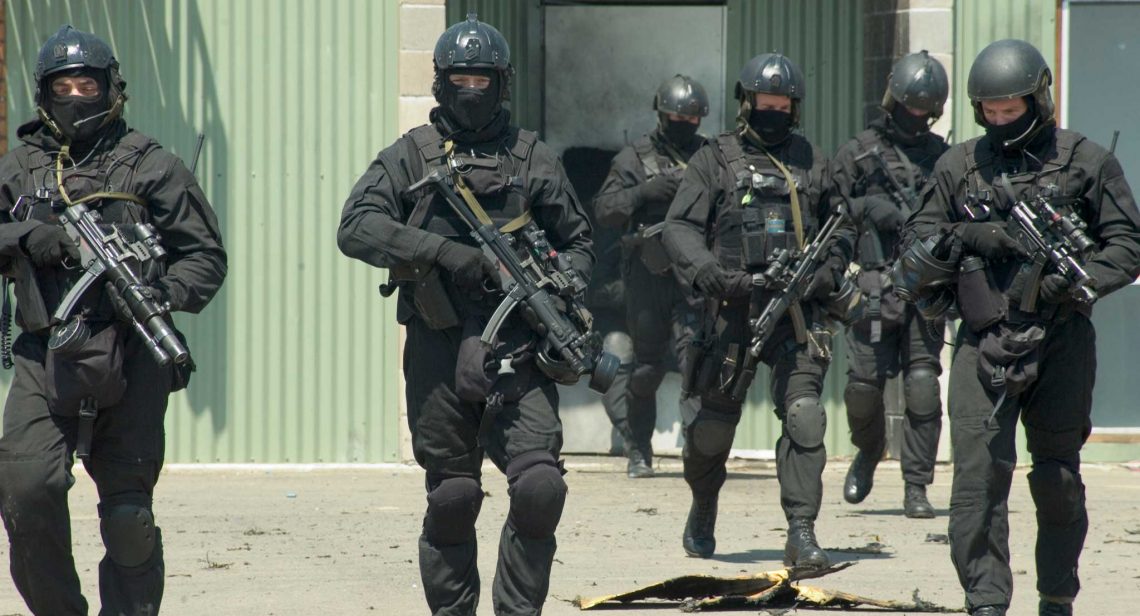 To be scientific in our approach to combat, we must first set fear, and dogma, aside. If we can control fear, we’re also more likely to spot the charlatans who seek to exploit it.

While they might not recall the date, most Aussies will remember the tragic events of 15–16 December 2014. A criminal-turned-terrorist entered Sydney’s Lindt Café, brandished a shotgun and took 18 hostages. When the NSW Police Tactical Operations Unit entered the café the next day, their gunfire wounded three hostages and tragically killed two, as well as the offender.

During the extensive media investigation that followed, I gave an interview alongside another former Commando team commander from TAG-East. For those who haven’t heard of TAG-East, here is some background:

The Tactical Assault Group, or TAG, is the Australian Federal Government’s most elite domestic counterterrorism capability. It is made up of Special Forces soldiers from two separate units: TAG-West, which is based in Perth and comprised of operators from the Special Air Service Regiment (SASR); and TAG-East, which is based in Sydney and comprised of operators from the 2nd Commando Regiment (2 Commando). Together, it’s their responsibility to counter any domestic threat to Australia and our citizens. To that end, the TAG units must consistently meet exacting standards of training and operational readiness throughout the year.

Now, when I first got the call to talk about TAG-East, I hesitated. I wanted to know more about the interviewer’s intended line of questioning, to ensure my expertise was relevant. Why? Because less scrupulous self-defence instructors have tried to exploit that siege, and other similar events, for marketing leverage. They take advantage of the heightened community concern that such things generate, because it’s easy to do. And I had no desire to inadvertently end up in that same boat.

When understood and harnessed properly, fear is a useful biological function, but it can also be used against us. This is precisely the modus operandi of the terrorist. It’s also the aim of the unscrupulous in business who will scramble aboard the aforementioned boat, aiming to ride the wave of fear as far as they can.

Fear, a naturally occurring phenomenon throughout the animal world, exists to aid in a species’ survival. Having a healthy respect for danger helps keep us safe, but fear — especially irrational fear — can also do the opposite. It can cripple us…and that’s why, throughout the ages, fear has been used as a primary means of controlling people. Sadly, some self-defence instructors see fit to use this tactic both in their marketing and on the mats. They indoctrinate students to believe that their particular martial art or, worse, their instructor alone, has all the solutions to their fears. They will then accept all teachings as a matter of faith; to question them or investigate alternatives would be seen as a betrayal of the instructor or the system.

This all works well for the instructor, who then has no need to invest in developing his system beyond what exists. He also need not fear the yardstick of scientific method. The indoctrination of students also puts them on guard against those who would question the faith, both from within the group and outside it. So it’s not until the truth slaps — or rather, king-hits — them in the face that they realise the value of questioning what they are taught.

By that point, of course, it’s far too late.

Fear of the unknown is normal. So, wanting to better prepare ourselves to deal with a perceived new threat is normal, too. Sadly, unqualified or under-qualified people offering solutions to every type of threat has also become the norm. When self-defence instructors make statements like ‘learn how not to be a victim of terrorism’, it’s not only ridiculous but an insult to victims of terrorism. Firstly, the incarnations of terrorism are so many, varied and situation-specific that such a thing is impossible to learn. If I’d been in the Lindt Café that day, I would be a victim of terrorism, regardless of what action I took. The same goes if I’d been a passenger on a hijacked aircraft on September 11 2001, or a patron in Bali’s Sari Club before a bomb tore it apart in October 2002. Such a statement could only come from somebody who knows nothing of terrorism.

Fear-based marketing is unfortunately nothing new, because it tends to work. However, fear can also be an incredible driving force in our search for knowledge. That is, so long as we are able to step back and look at our fear objectively (as suggested by the second principle of Kinetic Fighting: rationalise fear). Is your level of fear warranted, or is it perhaps overblown? Is it being exacerbated by sensational media coverage, or maybe by your own emotional state?

These are vital questions, because we must first regain some control over the fear if we’re to take control of the search for solutions. And if we want to control fear, facts and information are our key allies — but aren’t they always?

Across all forms of human endeavour, the scientific method is put to work in understanding the universe around us. We observe, create theories, collect evidence and prove facts — and the more we learn, the less we fear. It does not take long, using this method, for fear of something to turn into wonder at its complexity. For every question answered, two new questions are posed, and in the end we draw comfort not in having all the answers, but in having a robust, tried and proven method for seeking those answers. Fear then ceases to factor in our motivation to understand the unknown.

I, for one, am always wanting to understand how combat is playing out in the world. I then use that information to further generalise my training and instruction of others. Even with my own extensive background  in the martial arts and my personal combat experience to fall back on, I’m constantly searching for greater understanding. I want what I do to be peer-reviewed and tested, and for it to stand up to scientific criticism. This is where we will find truth, and a solid base of knowledge to build on as we conduct further tests and gather further experience. That’s what enables us to keep improving on what we do.

Now, back to the self-proclaimed experts who can supposedly show me how to ‘not be a victim of terrorism’. When investigating their methods, I look for certain things. I expect to see resilience training and other psychological techniques to counter high-stress environments and, of course, control fear. I expect them to teach behavioural tagging, threat indicators, room/floor awareness, weapon capability and so on. But no — typically, their terrorist-foiling technique boils down to disarming somebody who is holding a replica handgun to your head from various angles.

So, if you’ve been training in a self-protection system and now suspect your fears have been exploited for marketing purposes, it might be time to move on. For some, of course, the fear of admitting they’ve been played for fools will be too great. Greater, even, than the fear of carrying on with the training, despite realising that it is substandard and unsuited to their intended purpose. However, I expect that those so indoctrinated are unlikely to be reading this blog.

That being said, no one should feel stupid for being uninformed on this subject. Firstly, for obvious reasons, information on anti-terror measures is disseminated on a need-to-know basis by those who do know. Secondly, there are inevitable breakdowns in communication between the many government agencies engaged separately in preventing terrorism.

Know What You Don’t Know

It would surprise some to know that after the Lindt Café siege, even the NSW Police command was caught short on information. They issued a very naive statement, saying that their police were better equipped than TAG to deal with the siege. Their reasoning was that they supposedly deal with such things on a day-to-day basis, whereas the TAG does not. That suggestion was ill-informed, as the TAG operators from both Special Forces regiments rotate from domestic duties to international operations. These include the war in Afghanistan, where sub-units of the two regiments work together. There they make up the specialist combat capability of TF 66 SOTG (Task Force 66 Special Operations Task Group).

Furthermore, there’s plenty of evidence of the TF 66 units’ preparedness to deal with terrorists in their element. In fact, TF 66 was in recent years awarded the Meritorious Unit Citation. It read: “The Task Force’s outstanding performance against an unrelenting, cunning and ruthless enemy, in an unforgiving environment, was achieved through the collective efforts of every member of the contingent over the duration of the commitment. The superior combat operations results of Task Group 66 further emphasised the Group’s exceptional courage and commitment.”

If the chief of police can get things so wrong in regards to this subject, the general public can certainly be forgiven for being a bit behind.

So, what do we know? We know that since 2014, Australia has seen several other violent incidents committed by people claiming inspiration from terror groups. But, we also know that the likelihood of the average Australian encountering a terrorist threat is very low. And yet it has at times been vastly exaggerated by those looking to make a buck. Whether they’re a news commentator or self-defence instructor, these people undermine others’ efforts to be properly informed and realistically prepared. After all, we’re not talking about a teenager using a handgun to steal your wallet (although that shouldn’t be taken lightly). We’re talking about terrorists intent on committing unprovoked and extreme violence for the sole purpose of creating chaos and instilling fear in our communities.

So, if you’re a teacher of self-defence and have no field experience in dealing with such things, it’s probably better for everyone if you just leave it alone and stay within the realm of your expertise. As I mentioned in relation to how we control fear, there’s no doubt that, as a general rule, knowledge is power. However, the old saying “a little information is a dangerous thing” is equally true in the anti-terror space. That’s a place where making an uninformed decision may get you or others killed.

And to the student, I’m not saying you shouldn’t learn about such things. Just look deep into the background of the person teaching you. And if you find nothing to back up their claims, don’t waste another minute…