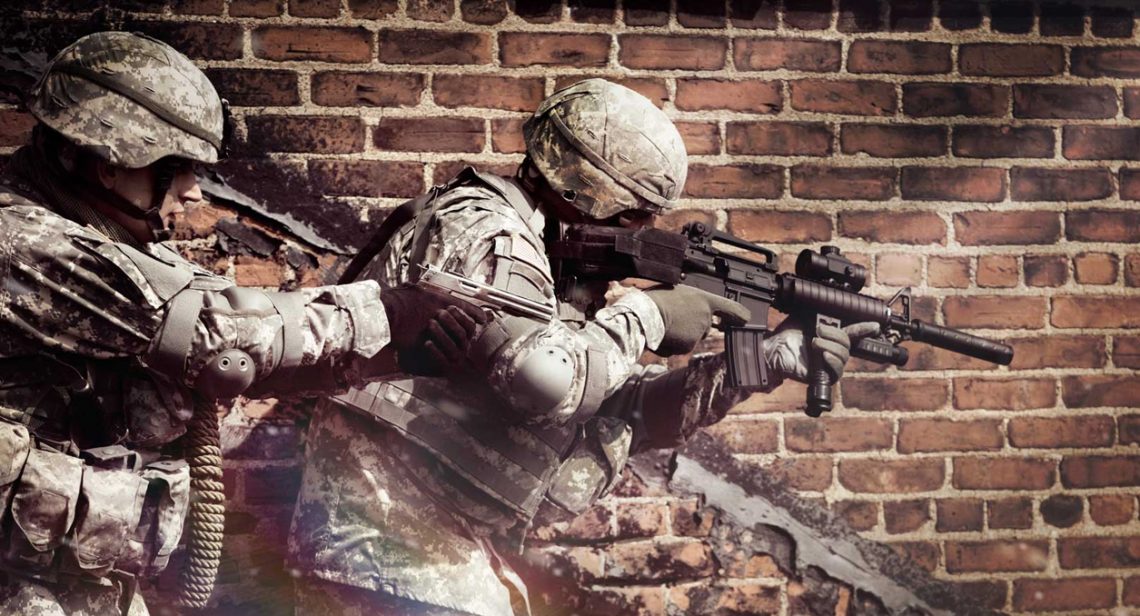 CQC: IS GRAPPLING THE KEY?

Knowing how soldiers apply their CQC skills on the battlefield can teach us a lot about self-defence. A report by the US Army suggests that those martial arts that best train balance — such as grappling systems — are the key to surviving in close combat.

“For many years it was generally assumed that the improvement in power and range of firearms would lead to battles being decided at a distance, and that hand-to-hand fighting would be a rare exception… How completely has the 20th century campaign exploded this theory.”

So said British Army Colonel Sir John Macdonald, way back in 1917. But as it’s turned out, the Colonel’s statement remains as valid here in the 21st century as it was 100 years ago. Yet with all the long-range technology available to modern militaries, how could that possibly be the case?

We humans have generally developed weapons with the goal of engaging the enemy from greater ranges, from the long spear to the bow and arrow, right up to the modern sniper rifle, cannon and rockets. However, just as we develop new weapons, we develop the ability to evade or protect against those weapons at a similar rate. For every new weapon to defeat a tank, for example, engineers will tailor new armour to thwart it. Armies cannot avoid the need to close with the enemy, so instead they aim to avoid the enemy’s weapons. Technology allows us to close with greater speed, as with military helicopters, or by avoiding detection, as with troop insertions by high-altitude parachute drop. In the end, the soldier will at some point be at close quarters with their enemy. So it’s also possible that they will be engaged in hand-to-hand combat.

Another reason soldiers need CQC skills is that wars today are increasingly fought against guerrilla and terrorist groups. Unlike armies that traditionally battled across established front lines, these clandestine fighters filter in and out of the communities that their opponents seek to protect. Having fought in two such wars in Iraq and Afghanistan as a member of the 2nd Commando Regiment (2 Commando), I have experienced close combat first-hand. But it’s not only Special Forces that see close contact with the enemy in these conflicts. After all, the Australian Army defines the role of its infantry as to “seek out and close with the enemy, to kill or capture him, to seize and hold ground and repel attack, by day or night regardless of season, weather or terrain”.

This sums up what infantry have done throughout history. It also explains why my Kinetic Fighting team is now instructing the Australian Army’s Infantry divisions in close-quarter fighting.

These are very different times to those experienced by the soldiers of the First World War, but one thing hasn’t changed: closing with the enemy is essential to achieving a decisive outcome on the battlefield. This is why the US Army conducted extensive research into the CQC techniques their soldiers have employed in recent conflicts. I’d like to share their ‘lessons learned’ with you here, as they may help you in assessing the needs of your own training, whether it be for self-defence or front-line operations.

A few years ago, the United States Military Academy (USMA) released a document detailing US Army soldiers’ hand-to-hand combat experiences. Close-quarters battle often involves weapons, so for the purposes of the study, ‘hand-to-hand combat’ was defined as: “an engagement between two or more persons in an empty-handed struggle or with hand-held weapons such as knives, sticks, or projectile weapons that cannot be fired.”

The report on this was written by Lieutenant Colonel Peter Jensen, Human Performance Program Chief at US Special Operations Command. In it, he wrote: “The 2009 US Army combatives field manual noted three specific lessons based on PAIs (post-action interviews). First, grappling was an ever-present aspect of a hand-to-hand combat encounter. Although striking and weapons use were not absent from hand-to-hand combat encounters, soldiers reported that grappling with an opponent was an integral aspect of any encounter.”

What the Stats Tell Us

LTC Jensen’s statement is well supported by the statistics in the report: “216 out of 1,226 soldiers (19 per cent) reported using hand-to-hand combat skills in at least one encounter. The soldiers’ descriptions indicated that hand-to-hand combat occurred in a variety of tactical situations and that the most common skills employed were grappling techniques (72.6 per cent), followed by the use of weapons (e.g. rifle butt strikes; 21.9 per cent); with striking as the least reported skill (i.e. punching and kicking; 5.5 per cent). These results further reinforce that hand-to-hand combat remains a relevant demand and the US Army should continue such training with an emphasis on grappling skills practised across a variety of performance settings.”

Now, let’s go deeper and look at these ‘performance settings’. In what kinds of situations did soldiers apply their close-combat skills? And how did these situations differ?

The soldiers’ descriptions of hand-to-hand combat situations were divided into four categories. They are listed here in descending order from most to least common:

The report states that detainee- and prisoner-handling was the activity that most often (by far) required the use of combatives skills (30.7 per cent of incidents). Meanwhile, the application of combatives in close combat was less than half as frequent (14.2 per cent). Soldiers used combatives much less often again in both the security checkpoint (6.1 per cent) and crowd/riot control (5.7 per cent) environments.

Why So Much Wrestling?

So, grappling features prominently in close-quarter combat involving soldiers — but why? To answer that, let’s look again at the environments in which the reporting soldiers found themselves when engaged hand-to-hand.

It’s logical that the detainee- and prisoner-handling scenarios saw the highest percentage of close-quarter combatives use, for two reasons. Firstly, detainees and prisoners will usually be unarmed. Therefore, they must be subdued and controlled using non-lethal techniques, hence the grappling. Secondly, arrest techniques are taught as part of the US military’s Modern Army Combatives Program (MACP), and the questioner asked participants if they had to resort to the use of ‘combative’ techniques. So, any hands-on technique from the program could possibly be documented in this category. This might be the case even if it was applied in a very minor altercation that might not usually be defined as ‘hand-to-hand combat’.

A point of interest here is that one of my men was attacked by a detainee who, while being questioned in the field, made a grab for a hidden knife and lunged at the soldier questioning him. That soldier had been doing a lot of Extreme Close Shooting (ECS) training with my platoon during his deployment, and as a result he drove forward with his body while using his ‘off’ hand to jam the knife,  enabling him to simultaneously draw his pistol and shoot the attacker dead. And yet, this situation would not factor into the US Army report. Why? Because the researchers defined hand-to-hand combat as being a “hand-to-hand fight without the firing of the weapon”.

One could also argue that if my soldier had been trained in US Army combatives, he would have instead grappled with the attacker, pitting hands against blade. After all, as the famed samurai warrior Musashi wrote, “How you train is how you will fight.”

It would be easy to summarise the USMA report as saying, ‘grappling is best in a close-combat situation’. But that wouldn’t be accurate. Yes, the evidence gathered from real combat situations shows that grappling is a key component of hand-to-hand engagements, but we must also understand why. Behind any general rule we’ll find an underlying principle — and knowing what it is will help us to predict and understand the exceptions that inevitably apply.

So, let’s put the insights from the report into context. We know that hand-to-hand combat is following the historical trend of remaining a part of general warfare, even with the introduction of modern firearms and technology. The defensive tactician’s take on this is that even if you’re armed, you will need CQC skills because you’ll be unable to rely wholly on your primary weapon. However, your use of the body’s natural weapons — kicks, punches, knees, elbows and headbutts — will likely be limited. Instead, you’ll want to employ the weapon/s in your kit, to use either as designed or as a blunt striking implement. The benefit of this is that you’ll increase the impact of your blows while reducing the risk of damaging yourself.

If you are unarmed — as may be the case in a civilian self-defence situation —strikes using arms and legs will, of course, be your key tools in defending yourself. However, if your attacker is armed, your aim should be to suppress their weapon. This will obviously reduce the chance of the weapon being used against you, but will also increase your chances of taking it for your own protection. And as the US Army’s report indicates, this is where grappling skills are needed to keep effective control of your own balance. This is what is known in Brazilian jiu-jitsu (BJJ) as maintaining your ‘base’. And without it, you have little hope of controlling your opponent or their weapon.

The experiences of both US soldiers and those of my own unit (me included) tell us this: grappling is a key skill set in most close-combat encounters. In some cases this is due to its specific techniques; in others it’s because of the attributes instilled during training in the grappling martial arts. A key one of those is balance — or more specifically, the ability to maintain balance while an adversary is trying to take it.

But, equally worth noting is that in some cases, grappling techniques are not the best (and may sometimes be the worst) option. Ultimately, it comes back to the principle of ‘knowing your end state’. In short, that means that your training must be suited to the types of enemies and environments you will encounter.

So, how much you use your grappling skills, and which ones you can apply, will depend on your situation: the environment, available weapons, applicable laws, and so on. It will also depend on your goal: for example, whether you’re trying to control a minor scuffle, or you’re fighting for your life.

What is certain, though, is that those skills are often required, and always useful.