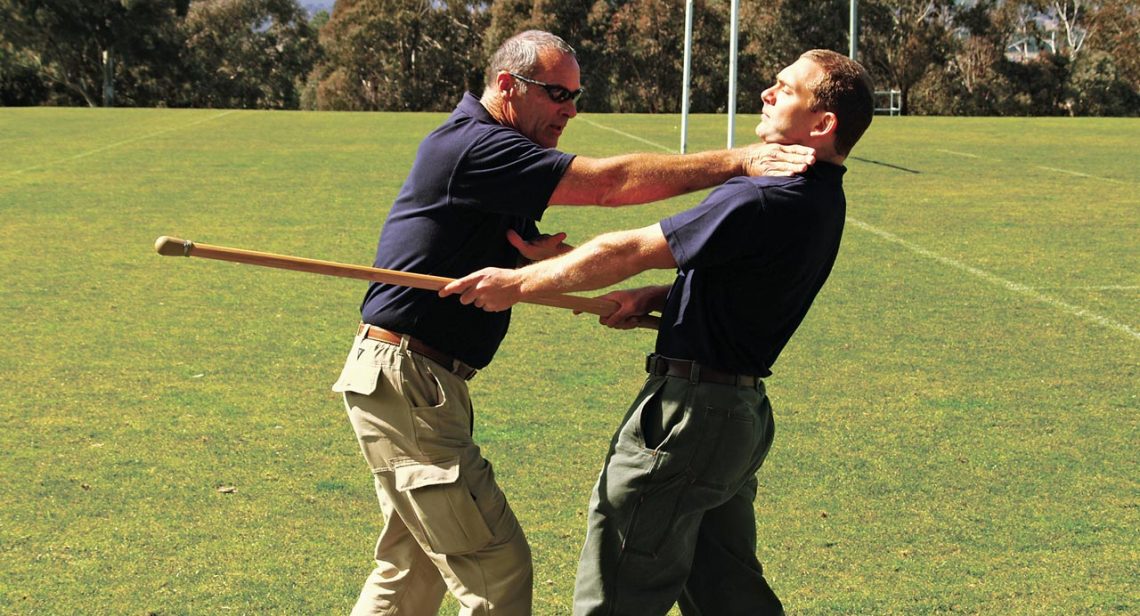 In military and self-protection training, we often talk about mindset and about posture. But rarely do we recognise how the two are related, and the effect our posture can have on the mindset of others. That’s what makes the ‘hunting posture’ so important for soldiers in close-quarter combat.

We’re taught to hold our posture from a young age. We copped it from mum at the dinner table and from the teachers at school. And probably from coaches and physiotherapists along the way, too.

If you train in a martial art of any kind, be it a modern combat sport or ancient budo, you’ll have heard it from your instructor more than anyone else. Correct posture — or at least, a posture that serves our chosen fighting method — is drilled into us every time we hit the mats. And it doesn’t take much hitting or getting hit to realise why: it has a direct effect on our balance and power.

What is not often said, perhaps because it’s not widely recognised, is that our posture also influences our combative mindset. Not only that, it influences the mindsets of our enemies. And why wouldn’t it? The term ‘body language’ exists for good reason. We detect, often on a subconscious level, the subtle movements of other humans, and interpret their meaning. This in turn influences how we act and interact. And although we’re often unaware of the physical signals we’re sending ourselves, most of us will have at times used body language very deliberately to our advantage. ‘Stand tall’…‘hold your head up’…‘look him in the eye’… No doubt you’ll have given or heard instructions like these at some point. Why? Because like many other animals, we identify strength, or a lack of it, in the physical presence of others. And as a species whose brain is both his primary tool and weapon, we have learned that it sometimes helps to manipulate this.

Non-verbal communication doesn’t just happen between humans — to an extent, it’s an interspecies thing, too. As participants in a global food chain in which we weren’t always the top dog (and at times, still aren’t), we can recognise the signs of danger that familiar creatures present. For example, you probably don’t need to read the notes on these images of dogs to spot the body language that spells out a warning. And you don’t need to have seen many David Attenborough films to be able to recognise a hunting lion’s intent (you’ve probably even seen a much smaller cat display the same cues in your own backyard). If we don’t overthink it, our ability to interpret signs of threat is better than you might expect. It’s innate because it’s integral to human survival.

So how does all this relate to human-on-human combat?

Well, I take a pragmatic approach to teaching combative skills. I’m always looking for links between the various martial arts, combat sports and military techniques in which I have experience, aiming to find the simple truths that apply to all. The five principles of my own system, Kinetic Fighting, were formalised using exactly this method, with the first three originating from combat sports and supported by the principles of Advanced Close Quarter Combat (ACQC). The fourth principle came directly from the old Military Unarmed Combat (MUC) doctrine and was handed on to Special Forces Close Quarter Fighting (CQF) training. The fifth principle I developed after my own experience of hand-to-hand fighting on the battlefield — and it’s here that any notion of combat being a ‘sport’ is removed.

The first principle of Kinetic Fighting is to maintain balance, which is achieved via correct posture. But there is also a ‘hunting posture’, which is what affects our mindset. I remember after the selection process for entry into the Australian Special Forces, during the reinforcement cycle, that the instructors of the close-quarter combat course would be yelling out instructions like ‘adopt a hunting posture’ and ‘bend the knees, roll the shoulders, like you are hunting’. Years later, after becoming an instructor myself, I began to investigate the purpose of such a posture. Was it just about shooting straight?

I never would have imagined where I’d find the answer.

While training with combative instructors from the US Marine Corps in 2006, I was fortunate enough to meet a man called Hunter Armstrong (pictured above, striking) and over the years that followed, we became friends. Armstrong was a student and friend of the famous American martial artist, researcher and US Marine Corps Captain Donn Draeger. Draeger was one of the many American soldiers stationed around the Islands of Japan and Okinawa after World War Two who began studying the fighting arts of the region. But Draeger took it to another level: in fact, he was so highly regarded for his training and research that he became the only non-Japanese allowed entry to the Kobudo Shinko Kai, the Classical Martial Arts Preservation Society. He also wrote 30 books on human combat, including Western fighting traditions, before his death in 1982.

Like others involved with Draeger, Hunter Armstrong took up the Japanese martial arts in the early 1960s, starting with Goju-ryu karate. He later moved on to one of the oldest Japanese classical arts still being taught today, a sword-focused system called Yagyu Shinkage-ryu Heiho (the last word meaning ‘strategy’). It was this old knowledge linking posture to combat mindset that caught my attention. Armstrong was taking methods tested on the battlefields of feudal Japan and applying them to US Marine Corps bayonet training. His training was backed up by his deep knowledge of hoplology, the study of the development and evolution of human combative behaviour.

And as it turns out, posture was considered key to survival long before our school teachers started hassling us about it.

The postures displayed during a typical street fight or pub stand-off really have nothing to do with a combat mindset. This form of posturing is known as ‘affective behaviour’ and is high in emotion. It’s used with members of one’s own species and its first aim is to intimidate via a threatening posture. This is where the human ‘animal’ attempts to show how big they are, standing tall with arms splayed and chest out, while threatening with words and eye contact. If an attack is launched, it is usually an angry attack, provoked by insult or a desire to prove dominance within the social group. It often starts and stops spontaneously without real conclusion, and usually results in relatively minor damage (one-punch kills often owe more to our hard-surfaced built environment than the striker’s specific intent). Similar behaviour is exhibited by many other mammals and especially among alpha males, where it’s used to determine rank.

On the other hand, predatory behaviour is backed by a cool mind. Predatory aggression is seen across the animal world and is predominantly interspecies —  meaning, one species hunting another. Its primary purpose is hunting and killing food, and as such the posture must be efficient for movement and attack. There is no sound during the stalk so as not to warn the prey, although sound may be used as part of the attack. The eyes are used only for gathering information and a calm, calculating mind is required in stalking and planning the attack. The aim of the attack is to kill, not ‘win a fight’, and is absolutely necessary for the survival of the hunting species.

In turn, the purpose of stalking posture is both concealment and biomechanical functionality for attack — just as you’ve seen on Attenborough’s videos. It is this stalking posture that’s hardwired in us. And if seen, it tells our opponent of our intent. It says that we are a predator, not prey; that we are not afraid and, by extension, perhaps they should be.

With that in mind, you can see how posture can help us develop a combat mindset and further enhance it in conjunction with other training methods. Once we have tapped into this ‘hunting’ mindset, we can switch it on as needed and even apply it outside of combat. So the next time you think about your posture, have a think about what your mindset is at the same time. The link may surprise you.