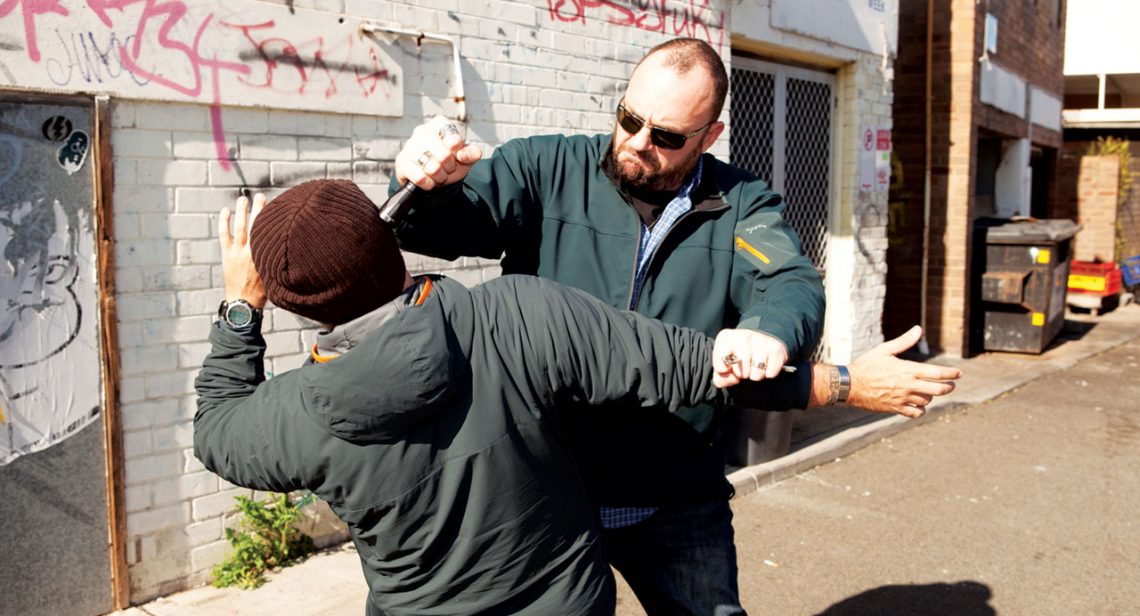 The Kinetic Fighting–Integrated Combat (KEF–IC) syllabus is based on five principles: number 4 is ‘Make full use of any available weapon’. For anyone interested in improving their chances of survival in the case of an assault, it’s vital to learn how legal, everyday objects can double as improvised weapons.

When an attacker has a weapon, as they often will these days, only fools rush in empty-handed, if at all. That’s the mentality of those of us who have survived real violence in the course of our daily employment. So why do so many ‘self-defence’ schools ignore weapons — even the traditional/historical ones, let alone the legal, non-lethal defence tools available to us today?

Knowing how to recognise and create tools has always been essential to our survival as humans. From the humble rock to the balanced spear, to the M4 assault rifle and the long-range missile, many of those tools were selected or created specifically to cause harm. Whether they were used against other humans seen as a threat, or against animals for hunting or protection, they were necessary. Maybe not always to use, but to have — just in case.

As the old saying goes, walk softly, but carry a big stick. (Or maybe not, unless you have a limp…but we’ll get to the legalities later.)

The most lethal attribute we humans possess is not claws, teeth or leaping ability. In fact, compared to other animals topping the food chain, we are physically pathetic. Completely outgunned. But only in the metaphorical sense, of course: literally, it’s the other way around. The firearms we’ve invented more than make up for what we naturally lack. Our strength lies between our ears — hence the Kinetic Fighting mantra, ‘your mind is your primary weapon’. And as the history and evolution of our species indicates, a key function of the brain is driving our use and development of the tools we require to enact our will to survive. It’s a constant battle of one-upmanship, both with our fellow man and the forces of nature.

So, you can guarantee one thing: any person whose nature it is to take, rather than earn, what they need or want, will select tools to do that. Possibly with premeditation, or sometimes on the spur of the moment. Simply put, when people decide to do bad things, they gather the tools to make those bad things easier for them — and usually worse for the victim.

The upshot here is that if you’re not thinking the same way, you’re at an immediate disadvantage if violence ever visits you. The battle really begins before any conflict starts — and how well prepared are you?

When I rewrote the Close Quarter Fighting (CQF) manual for Special Forces, I kept one principle from the old doctrine that rings true through the ages: ‘Make full use of any available weapon’. To give you the best chance of defending yourself and others, you must always be armed. To be unarmed, just because you see yourself as a law-abiding citizen, is to place yourself at a significant disadvantage when dealing with a real threat.

Having recommended that you arm yourself for defence, there are two points I want to make clear:

Firstly, being armed doesn’t mean that you should use your weapon/s if you aren’t at risk of grievous bodily harm or death. In fact, as a legally armed person — and I stress ‘legally’ — you’re often less likely to place yourself in harm’s way. Why? Because you don’t want a confrontation to escalate and require force, knowing that at least one person is armed: you.

Secondly, being armed does not mean breaking the law. You must abide by the laws of the country and state in which you’re living or visiting. For example, if you live in Arizona, USA, you can legally carry a firearm, either concealed or openly, with the sole purpose being for self-defence. But if you live in any state of Australia, you can’t carry any type of weapon for the purpose of self-defence (except maybe a milk crate — with good cause). So, while there are many things we Aussies can carry that could serve as weapons, that must not be the objects’ primary use. A well-constructed pen, for example, can be a very handy defensive tool — but its intended use is obviously writing (still useful for personal security; did you get that description/number plate/name?).

The more proactive among you may now be mentally cataloguing the contents of your pockets, bag, car glove-box, desk drawer, and so on. So let’s go there…

How can you arm yourself with effective self-defence tools in a country that does not let you carry weapons?

Really, you’re only limited by your imagination. Do you ride a bicycle? Almost anything can be used as a weapon or, if not a weapon, at least a barricade or shield. (Yep, that bag you’re carrying your stuff in…that’s a shield — and possibly a weapon, too.)

Let’s explore the principle of making full use of any available weapon. ‘Available’ is the key word here. Firstly, what are you carrying into the ‘threat space’ (meaning, any place where you may be confronted with a threat to your life or the lives of those around you)? You probably have weapons on you right now — but you may not have yet thought about how to effectively use them in that capacity. Your keys, pen, torch, belt, to name just a few items, are all potentially improvised weapons. And for Americans, depending on your state of residence, a knife, handgun or pepper spray may also be available to you. (Down Under, personal insect repellent can replace pepper spray — and may be even better if the most common threat you face is a swarm of mozzies.)

So, you’re often armed, whether you know it or not.

But I’m a Fighter…

For those who think your martial arts training means you won’t ‘need’ a weapon, a word of warning: Martial arts and combat sports make for an excellent training base, but it’s your body that is the potential weapon. And it’s your mind that must make this weapon work while under the great stress of trying to survive a violent encounter. You must be mentally conditioned to enable acceptance of the threat, so that you can get on with what you need to do to survive it.

So, the will to use your body as needed, when needed, is what makes it a weapon. However, your body works best as a weapon when it has a tool for that purpose in hand. Humans have achieved what we have in this world because of tools, and tools of war are no different. Don’t use your unarmed techniques to defend yourself; instead, use them to arm yourself. When applied to soldiering and policing, this is what Kinetic Fighting is all about: accessing and using our available weapons, while keeping our opponents away from them.

Ultimately, if you feel that you’re not justified in using an improvised weapon during a confrontation, then it may be that you shouldn’t be fighting in that situation at all. If, conversely, you think that you should use a weapon in any confrontation of any kind, you’re probably the reason that law-abiding people need to be armed.

If you do a weapon-based martial art or combat sport such as eskrima, it’s important that you don’t let it narrow your perception of what a weapon is. Nor should you train to use your weapons only in ways that fit the rules of your sport. The same applies to those who compete in tactical shooting events.

As mentioned above, the availability of improvised weapons relies in part on being prepared and knowing what you can legally carry. But, like self-protection generally, it also relies on awareness. What useful objects can you locate within the threat space? You may be armed with something small, but you could have a chance to better your weapon when dealing with a threat. These weapons are all around you.

Then there’s the space itself. If you’ve been in a martial arts school, you’ll know they are generally big, open, padded spaces in which no one could hit any dividing walls or pillars, or fall through a window. The floors are softly matted to help students avoid injury when falling or being thrown. But think about almost any other environment and it is likely to be littered with potential weapons, barricades and shields that could easily be used in a life-threatening situation. A book, bowl, plate, glass, fork, cup, lamp, phone, saucepan, chair, scissors, shoe…and on it goes. Everything is a potential weapon; it’s just that some things are better suited to the purpose than others.

The next time you go to a café or restaurant, have a look around from where you find yourself sitting. Can you see the door that you came through? How many exits are there in addition to that door? Is your back to the passing traffic of people getting up to pay their bill or find a seat? What is on your table, and what’s the best weapon to throw and the best weapon to keep in your hand? Which way would you exit through the crowd if a person entered the café shooting? Were there warning signs in the passing public outside that should have alerted you to an impending threat?

All too much to think about and you just want to relax and drink your cappuccino?

Again, if you have a combat mindset then you will be doing all of these things I’ve mentioned and more. This is the kind of thing I spend my time training in people to the point where you don’t think about it, you just do it. And you do it without effort, while you’re smiling away and talking to the person you’ve come to have coffee with.

The phrase ‘availability’ also covers using the threat space itself as an improvised weapon. Most combative techniques are about delivery of the weapon to the target; however, I spend a lot of time training how to deliver the target to the weapon. This requires an understanding of your body and the body of the ‘target’ that you wish to deliver to your weapon. What weapon, you ask? How about the concrete floor? Or a table, wall, motor vehicle, streetlight…any fixed object that will sustain the dynamic force of a moving body will do.

In understanding the principle of making full use of any available weapon, you begin to see the array of potential improvised weapons accessible to a trained individual, regardless of legal restrictions.

To recap, availability is determined by three factors:

All three work to support each other and to ensure that you are never found wanting for a weapon when one is needed.

Lastly, to apply the principle you first need to understand what you’re capable of, and what you’re not. Put your ego aside and be honest with yourself, as the biggest mistake you can make is to overestimate your capability, physical or mental. Think about the improvised weapon tactics discussed here and ask: do I have the will, as well as the way?