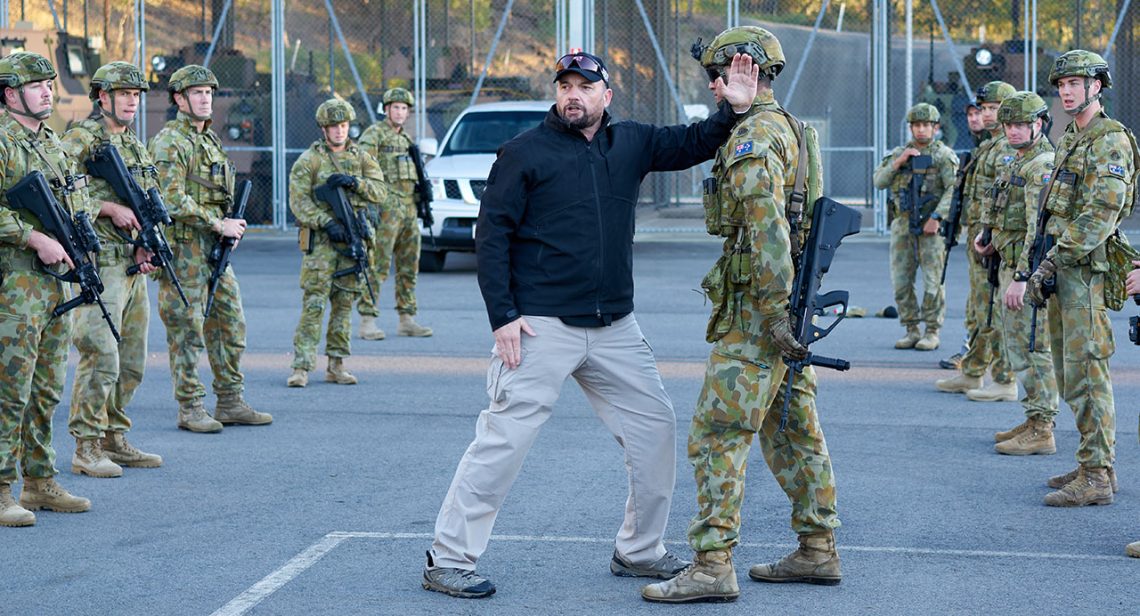 When it comes to self-defence, you want to be the weapon and have the tool, not the other way around. An integrated combat approach is the key.

You have probably heard the saying ‘don’t bring a knife to a gun fight’. However, the reality of a gun fight at close quarters is a little more complex than that. In my experience, you’re actually better off bringing both.

This is why the Australian Army uses the ‘integrated combat’ approach to training. However, it wasn’t always this way. Until recent years, Army training in close-quarters battle (room-to-room close shooting) and close-quarters fighting (combatives or unarmed combat) were seen to be two very different things. As a result, the attitudes of instructors from both camps were at times poles apart. I would often hear fellow firearms instructors say that unarmed combat was a waste of precious training time… You just need to shoot the enemy first! My comrades teaching unarmed combat would retort with ‘hands don’t have stoppages’ (referring to incidents when a firearm malfunctions or runs out of ammunition). This banter went on for decades, with firearms training usually coming out on top — as it should when you’re talking about training modern armed forces.

Then, things began to change. As Australia became more deeply embroiled in its longest war in history — the Afghanistan conflict — the two camps began to understand how much they actually needed each other.

When we’re in a gun fight, we just want to shoot the enemy; however, the enemy has his own thoughts on the matter. He’d rather not be shot and will do all he can to achieve that aim. That includes trying to shoot — or stab, or bludgeon — you at the same time. And if a weapon is going to malfunction, it will tend to do so at the worst possible time: that is, when you pull the trigger. So, to counter this, we must integrate close-range shooting skills, using both our primary and secondary weapons, with close-quarters fighting (CQF) skills.

Although CQF was often referred to in the past as ‘hand-to-hand’ combat, that is really a description of our absolute last resort. We much prefer using auxiliary weapons like the knife, or improvised weapons such as a gun magazine or tactical helmet. Assuming your training and tactics are sound, almost anything is better than bare fists if you want to maximise your chance of survival.

I know this only too well. The dire need for a seamless, integrated combat capability became clear to me through my own personal experience, as first discussed in this interview some years ago. That need was also reflected in the regular close-combat engagements experienced by my fellow Commandos. Since Australian soldiers entered Afghanistan, the 2nd Commando Regiment has been involved in the most fighting, had the most men killed and wounded in action, and has been the most decorated unit in the Australian Army. What this amounts to is a truckload of experience that can be — and has been — life-saving when put to good use. Several commanding officers recognised this, and the need to link our skill sets. So, utilising my background as an instructor in both close shooting and unarmed combat, the Australian Commandos began to move toward integrated combat.

Through this approach, we are able to produce a mindset in Commandos that it is in fact the soldiers themselves who are the weapons. Everything they use is just a tool to enhance their skills.

How does a Special Forces soldier’s thinking compare to that of the average martial artist — or to yours? You may, like many people, think weapons are only necessary for soldiers and those whose work involves dealing with potentially armed criminals. But given the randomness of deadly weapon attacks in our communities over recent years, some minds might be changing on this point. Although still relatively infrequent Down Under, these attacks show that successful defence is often more a result of intent (i.e. mindset) and having a useful tool at hand, rather than having hand-to-hand skills per se.

For many martial arts schools, the term ‘self-defence’ is little more than a throwaway line in their marketing spiel, anyway. Although some don’t deliver the promised skills because they’re knowingly selling snake oil, most simply lack an appreciation of what’s really required. This is particularly true of those that don’t address weapons — some even ignore defence against weapons, let alone how to use them. I’m not talking about traditional martial arts weapons here, but the kinds encountered on the streets today.

I believe this lack of attention to critical topics and skills is because weapons (at least, the types actually used in crimes) are taboo in Australia. Because criminals use them, we shouldn’t. It’s fine to re-enact Samurai death-dealing with swords and staffs in a dojo…but with the everyday tools of crime, not so much. They evoke real violence — and that’s not what martial arts are about, right?

Wrong. If true to the term ‘martial’, the martial arts are most definitely about violence. And if yours isn’t, it’s going to be useless as far as self-defence goes; you might be better off joining a running club. The point is that they are also about much more than just violence. And when they are about violence, they’re about delivering it in the right dose, at the right time, for the right reasons (but that’s a discussion for another day).

The fact is, weapon use is prevalent among those who might try to harm us. These tools are widespread in your ‘theatre of operations’ as a citizen. Therefore, any effective approach to self-protection must integrate weapon detection, defence and application.

The Tools Dictate the Training

Two blokes are in a pub. They’re pushing and shoving, then one throws a punch and the other retaliates. This is predictable (and also avoidable) behaviour, and neatly fits the fantasy on which most dojo training is based. It certainly happens, don’t get me wrong. But this is really how we wish violence would occur, if we had a choice. But what if one of the blokes has an accomplice who steps in to glass the opposition? And then joins in with his mate kicking their unconscious adversary in the head? In reality, the type of violence we most want to avoid — the kind that leaves physical and mental scars for life, if we survive it — tends to involve weapons. The aggressor/s may come armed or use improvised weapons found at the scene.

In Australia, you have the right to self-defence. However, you don’t always have the right to fully prepare yourself for dealing with the tools of violence, as a truly integrated combat model requires. For example, you can train in both defending against a knife and using one in defence, but you can’t legally carry the weapon. You can only have a ‘proxy’, which you use to apply a limited or modified version of your blade skills and tactics. You can’t carry a gun either, of course, but you also can’t train with it. This prevents the acquisition of certain defensive skills. Practising techniques with plastic guns is okay, but is limited in its effectiveness compared to using a working gun. If you’re not exposed to live shooting with a firearm, then you won’t fully understand the stress, the weaknesses of the weapon, nor all the real opportunities in dealing with somebody who has that weapon.

The upshot is, if you want to defend yourself against violence, you must expose yourself to the weapons that can be found within your environment, to the fullest extent that you can. You must also be realistic and adapt your training to suit the environment you’re in, or are planning to enter. At the very least, look at what’s in your pocket, bag, car, and so on — could anything you carry (or could carry, legally) be a tool for dealing with violence? Consider the object’s tactical use, likely effectiveness and how it complements your skill sets. If it doesn’t, is it because the object is useless? Or does your training just need adjusting to enable an integrated combat approach?