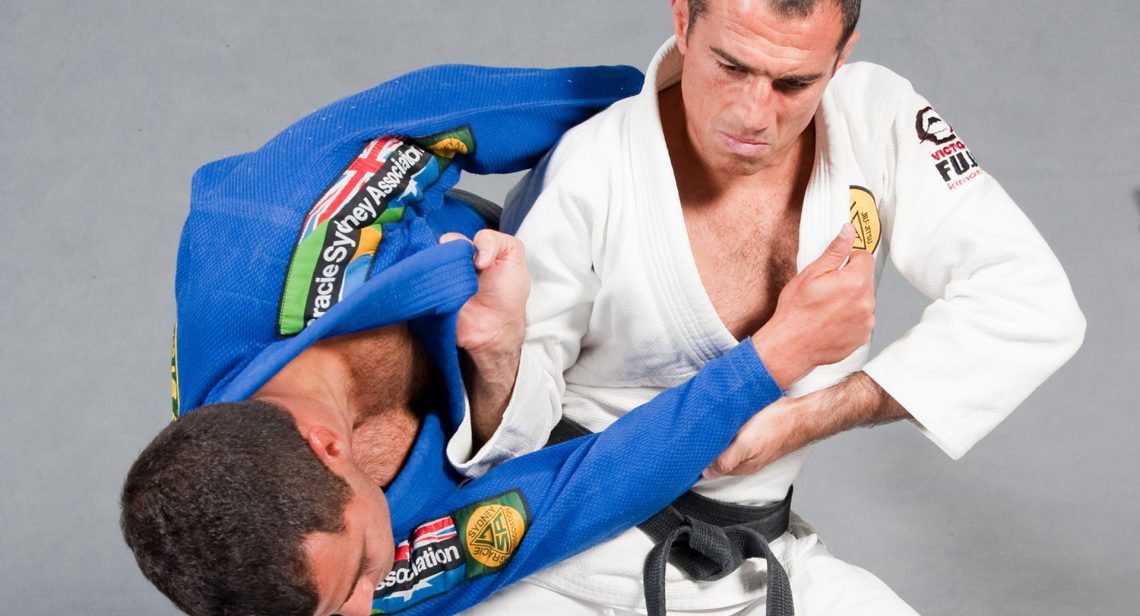 When it comes to combat-sports training versus training for real combat, it doesn’t have to be ‘one or the other’. After all, even the Olympics began as a test of warriors’ mettle. But, as grappling legend Royler Gracie and I once discussed at a gathering of police, sport can also derail people’s efforts to prepare for reality…

I always enjoy talking with experts — especially those with an appreciation of both the strengths and weaknesses of their expertise as it relates to other fields. One memorable chat happened a few years back, when I was in Las Vegas at a gathering of the Police Reserve. I was a guest of the SWAT team commander, who had previously served in the Special Forces and is now very well known in the USA as a CQB firearms instructor. Among the Police Reserve members there with us was the renowned grappler Royler Gracie (pictured above).

Most who follow the martial arts will know the Gracies as the family who spearheaded the Brazilian style of jiu-jitsu. What is now known as ‘BJJ’ was first introduced to North America and beyond as ‘Gracie jiu-jitsu’ by the famed Gracie brothers (of which Royler is one) and their father, the late Professor Helio. Royler, for his part, won numerous grappling world championships, competed with success in the world’s premier Mixed Martial Arts (MMA) competitions and coached numerous BJJ champions of the next generation. In short, he is an expert in his field and has played a significant part in jiu-jitsu’s development.

So, I saw Royler in the crowd and went to chat with him — but I decided I’d only talk about firearms. This was because I wasn’t sure how he might receive my opinions on the subject of combatives, and especially its relationship to jiu-jitsu. I didn’t I want to be seen as disrespectful in any way to a man who I thought of so highly for his accomplishments in martial arts. You see, the term ‘combatives’ as applied to what I do is quite different in meaning to the term as it’s used (and often misused) in the civilian and commercial context. It can get controversial.

Combatives by Another Name

‘Combatives’ originated in the military — but it’s basically just an alternative name for close-quarter combat or close-quarter fighting (CQC/CQF). All these terms refer to a suite of tactics, techniques and training methods systemised to meet a mission objective. That mission? To rapidly equip soldiers with the skills and mindset necessary to survive close-range combat with similarly armed combatants, who are generally intent on killing them. The combat may be ‘hand-to-hand’ (another term previously used by the army), but one or more of those hands, of either or both parties, is likely to contain a weapon.

The methods that make up a combatives system may be appropriated, stolen, adapted, re-engineered or devised from scratch — usually, all of the above, to varying degrees. It doesn’t matter, as long as they’re effective. They are merely the means to an end.

Of course, combatives methods do cross over into non-military and even civilian applications. Case in point: Kinetic Fighting’s own public programs utilise the same core principles and techniques as the Army Combatives Program (ACP), hence the name Personal Combatives. However, the influence of any one pre-existing fighting system on a combatives program is limited by its applicability to the battlefield. That is, our environment, equipment and aims — and those of the enemy. Therefore, in the Army we don’t teach ‘Gracie combatives’ or ‘karate combatives’, or ‘kung fu combatives’…etc.

Training and competing in these ‘root’ fighting arts is important, don’t get me wrong. That’s how we discover things that can work in a war-fighting situation. It’s also how we get fundamental skills and attributes to a level where they can be applied or adapted for combative use. But that’s where it ends — or at least, it should. When stylistic bias does creep into military and law-enforcement CQC programs (i.e. when personal preference and politics are prioritised over efficiency and effectiveness), it’s to the detriment of the end users.

But, I digress. Back to my chat with Professor Gracie…

Bringing BJJ to a Gun Fight

Despite my initial reservations, Royler and I ended up talking about Integrated Combat, the CQF method I developed in 2007 for Australian Commandos. This was the forerunner to the Army Combatives Program, within which Special Forces CQF is now called ACP Level 4. Its key elements have also spread to a selection of other special forces and police tactical units in Allied countries.

Things really got interesting when Royler told me that he wouldn’t want to get into a “jiu-jitsu fight” when firearms were involved. I was not only surprised by his statement, I was excited to speak with a man so confident in what he does that he can speak freely of any limitations it may have. He had my full attention.

Due to his work with law-enforcement groups, Royler has a good understanding of the needs of operational police as well as the shortcomings of police training. Being a senior Gracie, he also has an intimate and applied knowledge of the martial art founded by his father and uncle.

When I say it’s unwise to get into a protracted wrestle with an assailant, some may take that advice with a grain of salt — even if they know I’ve been in close combat with an enemy who was determined to kill me, and regardless of how many Black-belts I may have. However, when an icon of the grappling and no-holds-barred fighting world with the surname ‘Gracie’ says it, even skeptics must take note.

Personally, I can say that I’m alive today thanks to my ground-fighting skills, developed over many years training in judo and BJJ. However, the skills taught today are different to when I started BJJ 18 years ago, or judo in the 1980s. I see BJJ today as being lost in sport, and I know there are many instructors who agree. Royler lamented the changes he’s witnessed since sport BJJ became so popular, and he is not the only member of his family to have spoken out on this subject. He told me that he’s seen BJJ Black-belts who can’t get out of a headlock! That would have been unthinkable when I started out in BJJ, and it must be crushing for the Gracie family to see their fighting tradition being diluted.

Never mind not bringing BJJ to a gunfight; some forms of BJJ shouldn’t be brought to a fight of any kind. For example, it’s not uncommon to see BJJ competitors today ‘pulling guard’ when not even in contact with the opponent. (For those unfamiliar with this tactic, it’s basically just sitting down and butt-scooting toward your opponent.) You might even see two grapplers do this at the same time, then spend 10 minutes fighting for an advantage from 50/50 ‘guard’. Then, the bout ends and one gets a medal that says they’re a legitimate jiu-jitsu champion.

Any relevance to combat in the above scenario is lost on me (and if scoot-guy ever pits his skills against this guy, he’s in trouble). Yet, some believe that these are the elite exponents of a legitimate — or even ‘ultimate’ — method of self-protection. On this matter, I completely agree with the Gracies. Speaking with Royler helped me see that while BJJ may be largely lost in sport, the Gracie brothers never imagined, let alone intended, that jiu-jitsu would relinquish any of its relevance to real fighting.

The strange thing about this situation is that competition has played a role in training fighters for the ‘real thing’ since ancient times. The original Olympics were invented for that very purpose. The Gracies themselves earned their reputation, and proved the validity of their concepts, largely through sporting matches. These included vale-tudo (‘anything goes’) fights in Brazil, and the early Ultimate Fighting Championship (UFC) tournaments, which the Gracies started in the USA. However, it also included many grappling bouts under more limiting rules, with no striking

So, where has it all gone so wrong since then? Why do we now have so many ‘combat sports’ — be it BJJ, Olympic karate or taekwondo — that are so far removed from real combat?

The unique value of combat sports — and the key reason for their invention — is in simulating real combat and developing specific skill sets required for it. The aim, of course, is to replicate the physical and mental stressors of violent encounters in a way that will not see anyone die or become irreparably damaged in the attempt.

However, problems arise when the other factors that influence sports begin to take precedence over this original purpose. These include:

Additionally, competitors will invariably adapt their game to exploit the rules in order to win. So, you can see how even well-intended changes to rules, equipment, time limits, etc. can turn ‘combat’ into something quite different.

Where to from Here?

In my view, you must have competitive elements of training. They are an essential part of the skill-enhancement programs that support Australia’s ACP, and the same goes for America’s Marine Corps Martial Arts Program and others. However, they are just that — elements. Training for combat requires a multifaceted approach and combat sport is a part of it, but it’s by no means the be-all and end-all.

People are inclined to believe things that are too good to be true, if they have insufficient experience to tell them otherwise. In the martial arts’ case, that may be believing you can train to counter violence without ever striking or being struck. (Tip: You can’t.) Or, maybe it’s believing that training to punch and kick an opponent of similar size and skill, under a referee’s watch, is all the preparation you need to deal with a predatory attack. (Tip: It isn’t.)

If you do what you do for fun, then so be it, but see your sport for what it is. At best, it could provide the primary physical skill base and be highly complementary to your self-protection training; at worst, it could be teaching you everything you ought not to do.

So, go play, but know your purpose.